Saudia Airbus A330-200 leased (wet-lease) from Onur Air (TC-OCH) made an emergency landing at Jeddah Airport without its nose gear resulting in damage when nose sank to the ground. Flight #SV3818 made emergency evacuation via slides on the runway.

“The Captain made several attempts but failed to correct the malfunction with the front landing gear. Subsequently, the Airbus 330 made an emergency landing with the nose gear retracted,” Abdurahman Al Tayyib, a spokesman for Saudia Airline quoted as saying by Al Madinah daily.

“He also said that the issue was caused due to a problem with TC-OCH’s hydraulic system.”

The aircraft, an Airbus A330-200, took off from Madinah-Mohammad Bin Abdulaziz Airport, Saudi Arabia, at 17:25 (14:25 UTC) on a flight to Dhaka, Bangladesh. The flight had just reached FL370 (37000 Feet) in the climb when the flight crew decided to turn back. The aircraft then changed course towards Jeddah, Saudi Arabia. The aircraft made circles in the vicinity of Jeddah and carried out  low passes over runway 16C until it landed on runway 34R at 21:49 hours local time with the nose landing gear retracted.

Al Tayyib said that the flight made emergency evacuation. There were 141 passengers on board in addition to 10 crew members. The concerned authorities have started a probe into the accident, he said.

The plane suffered considerable damage, but passengers were evacuated via emergency slides and no injuries have been reported so far.

In addition to this accident,

Another Turkish passenger plane, belonging to the Career,  carrying 234 people aboard made an emergency landing in Russia’s Volgograd region due to unspecified reasons on May 21.

The Onur Air Airbus 321 made the emergency landing after cabin pressure changed, authorities in Volgograd said.

Authorities in Chelyabinsk, the flight’s originating point, however, said the plane made the emergency landing due to a technical fault.

While some of the passengers were checked in to a hotel in Volgograd, another aircraft was sent to fly some of them back to Chelyabinsk, authorities said.

Saudi Authorities paid attention to the mishaps happened the last 3 days in a row and launched a probe. 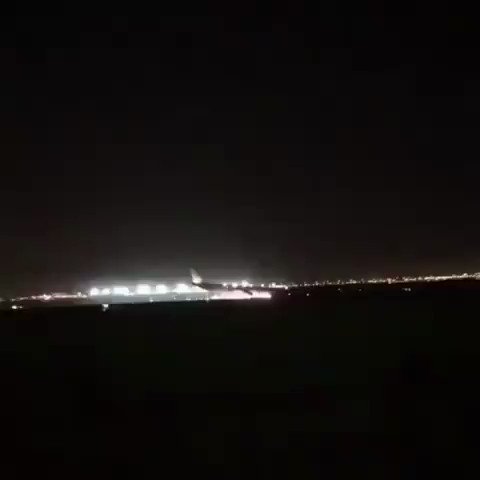